The popularity of the state of California tattoos is growing. It is common among people to have patriotic tattoos that are dedicated to their country. However many people also like to have state-oriented tattoos. California is the most populated state in the United States and it is the sixth-largest economy in the world. 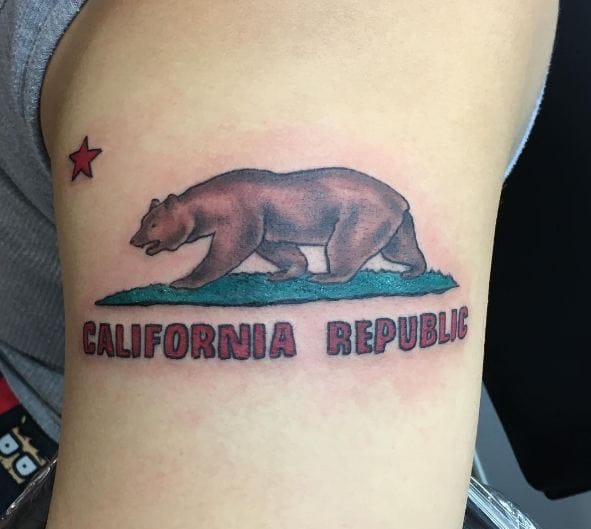 2. If you do not want to try Bear tattoos then a cool idea for a tattoo is to get inked with the word ‘California’. There are many styles that you can choose from but my favorite is to get it tattooed across the forearm like this. 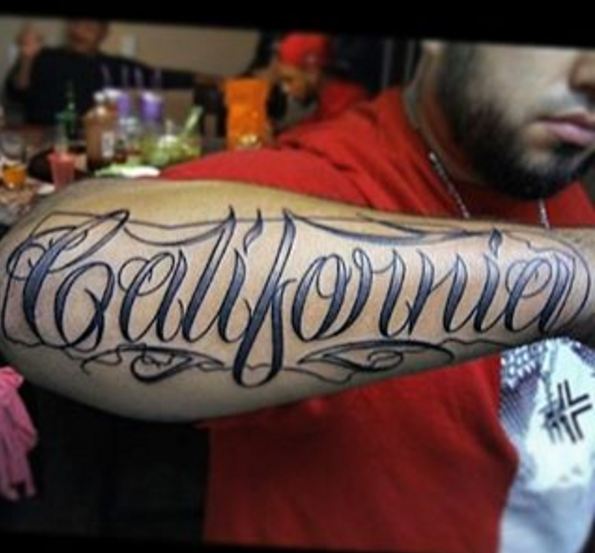 3. Bear is the state animal of California and it is preserved by the government of the state. You can support this cause by opting for a bear tattoo design on your arm. 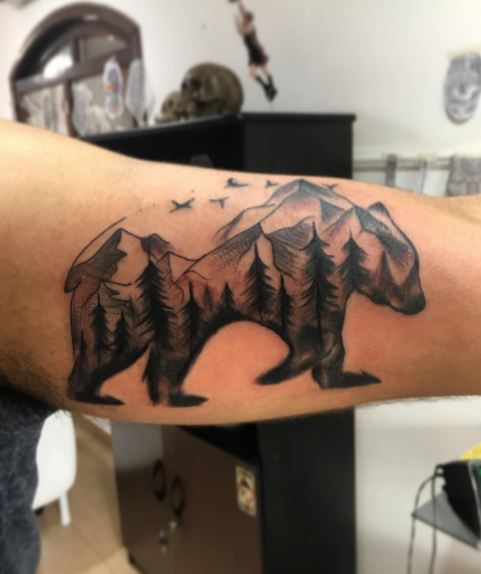 4. The bear flag is also very popular tattoo design in California. You can try a silhouette bear flag tattoo along with the star tattoo in background. 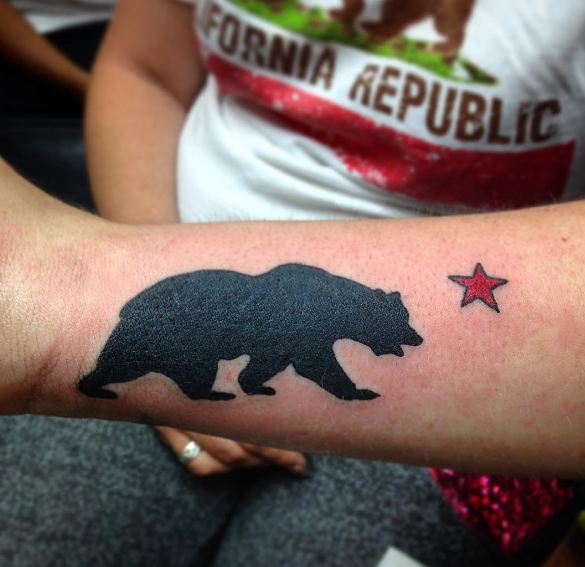 5. Instead of trying a normal bear tattoo you can show a grizzly bear roaming free in Californian jungles just like this. 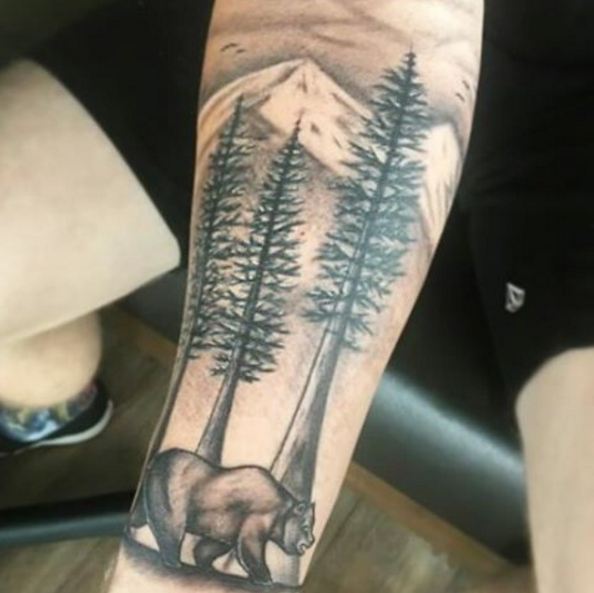 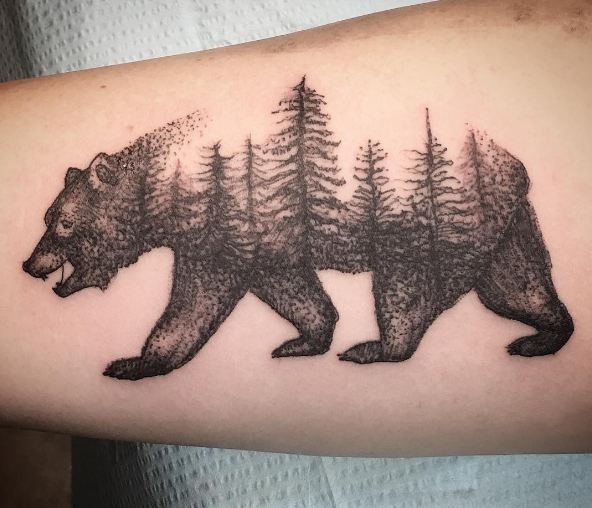 7. Las Vegas is the hub of casino clubs, therefore, it would be suitable to show it in your tattoo design. Here is a state of California map tattoo design with a skull (inspired from spades of playing cards) in the background. 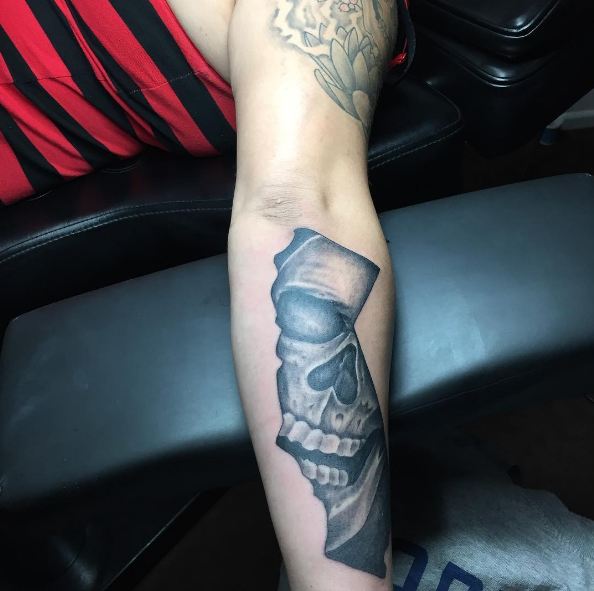 8. Instead of trying the usual bear flag tattoo design you can also opt for a differently styled bear such as one inspired from teddy bear or from the movie TED. 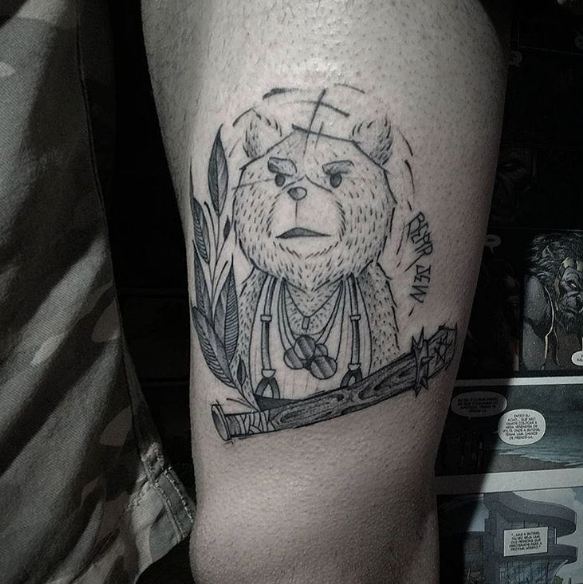 9. Dwarf Desert Poppy is common flower of state of California so it is obvious choice if you are looking for a flower tattoo. I bet you will feel proud of these interesting California facts and stats. 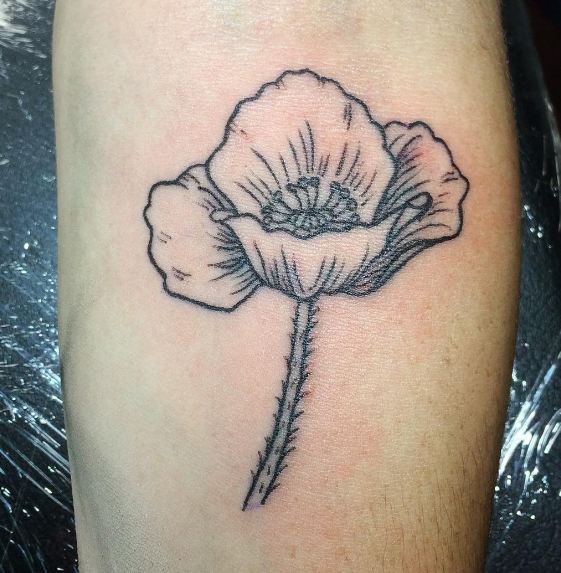 10. One tattoo idea that your artist might suggest you is to try a double exposure tattoo of state of California map. I would suggest trying the combo of flowers and map like this. 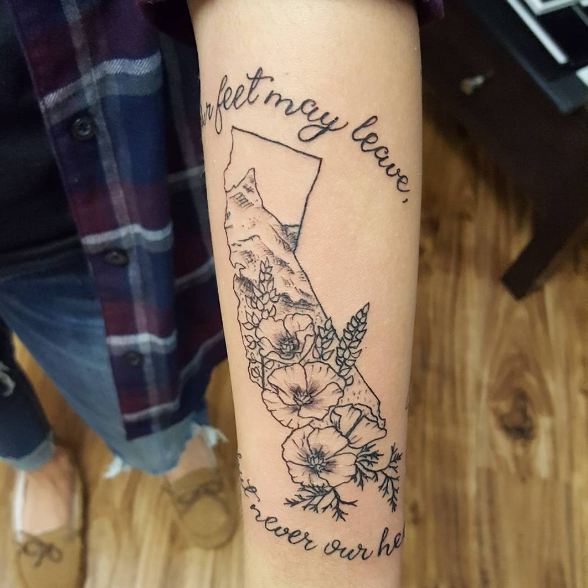 11. A realistic bear tattoo design is always hard to ink especially on body part like forearm or bicep. However if you find an experienced artist then I would highly recommend it. 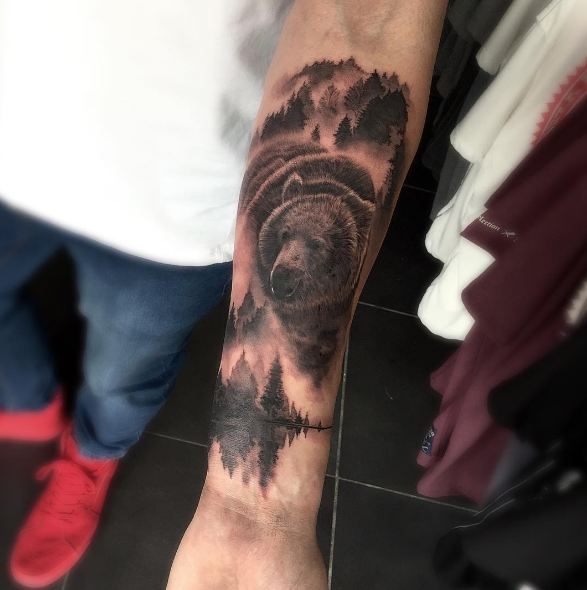 12. The Golden Gate Bridge of San Fransisco is one of the most popular bridges in the world and is often shown in movies. If you are from San Francisco then you should opt for this design. 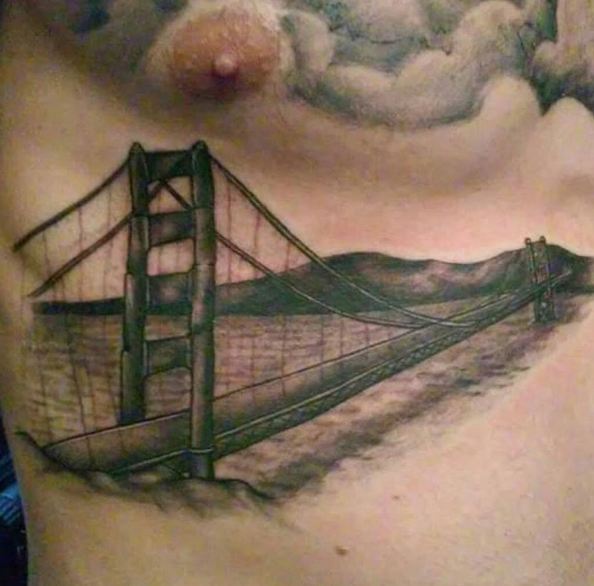 13. California is very popular for its west coast and beaches. You can show all the beauty of California in a map tattoo design like this. 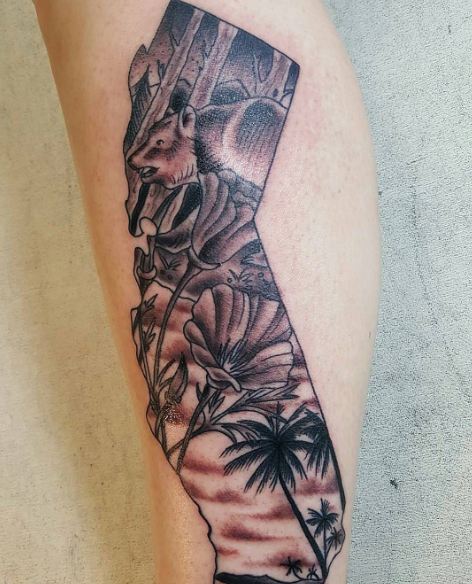 14. You don’t have to opt for a large size California tattoo to show your love for the state. A small size tattoo on wrist or hand would also be good. 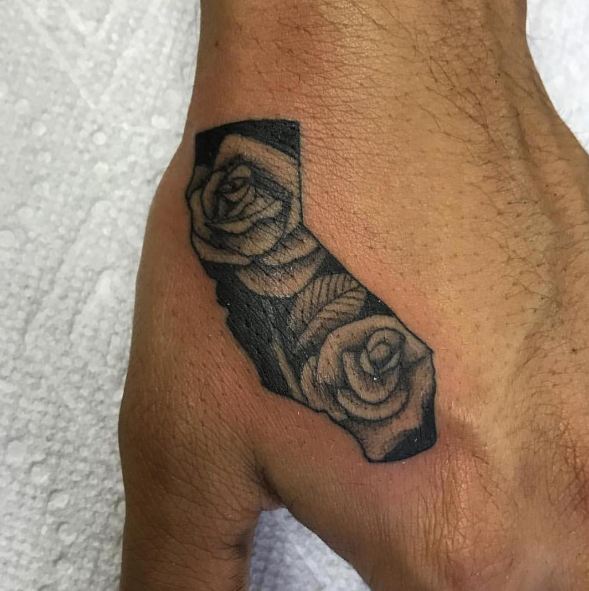 15. You are not a true Californian if you haven’t traveled on Route 101. You can honor the longest and last remaining route of California by getting it tattooed on your body. 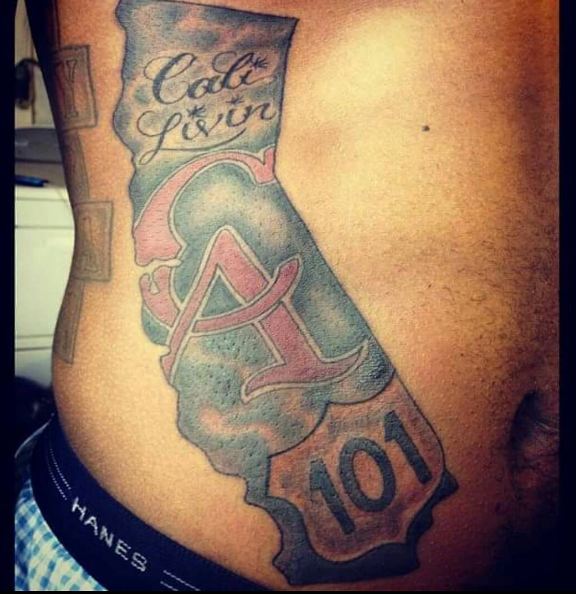 16. If you live in the coastal areas of California then there would be no better tattoo design than beach tattoo. 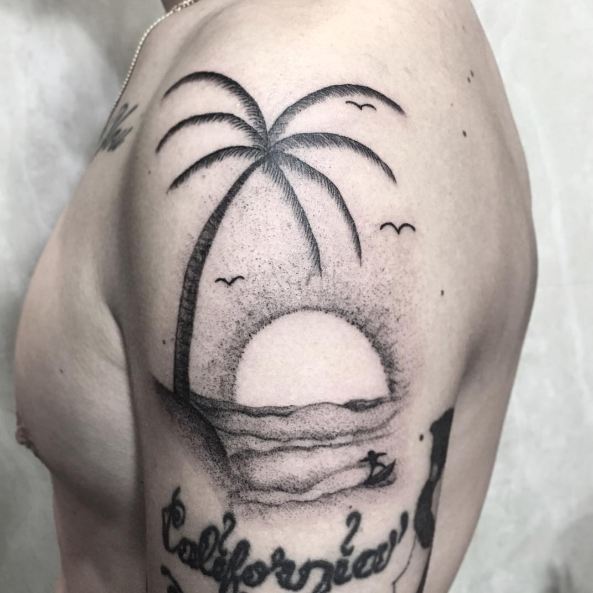 17. While many people opt for bridge tattoos on the chest here is a better and smart choice. You can try the golden gate bridge tattoo across the forearm. 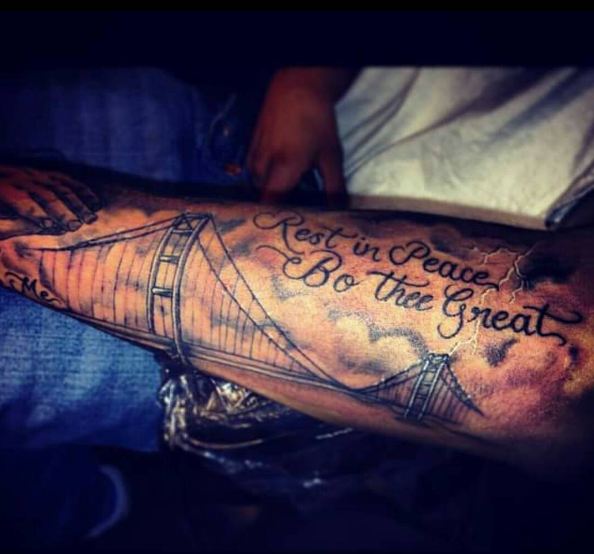 18. As California is the center of Hollywood, so one cool idea would be to try a portrait tattoo of any of your favorite actress or actor. 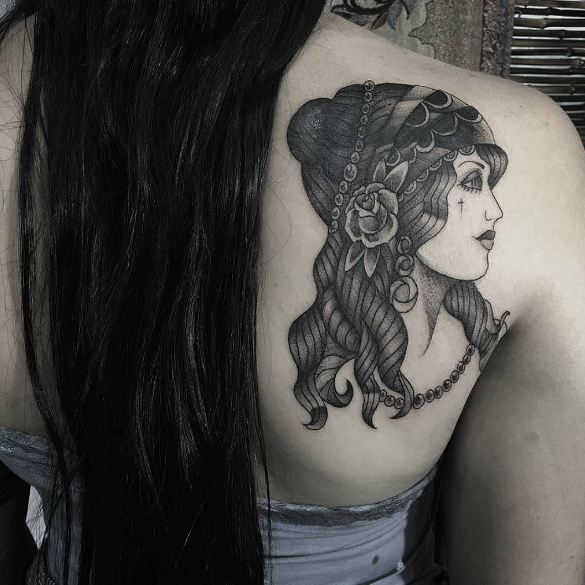 19. You can try a full sleeve California tattoo design. Even though not everyone would like it but you would not mind if you love your state madly. 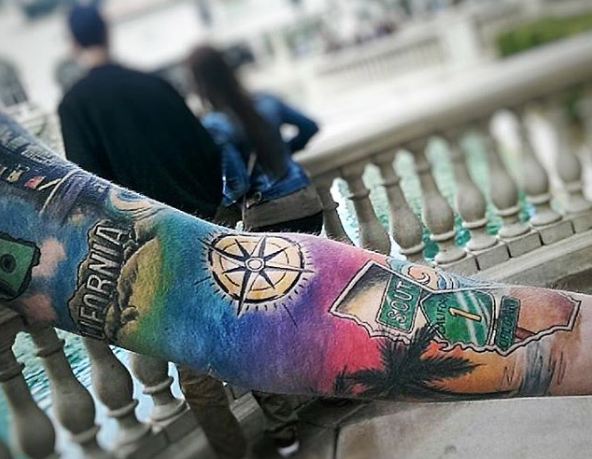 20. You can show your patriotic side by opting for a national flag and bald eagle tattoo in the shape of map of California. 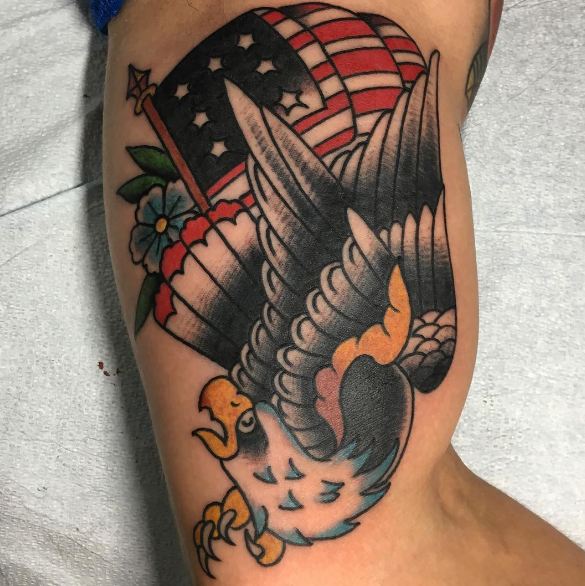 21. Here another beautiful ‘California’ tattoo design on the forearm of this guy. 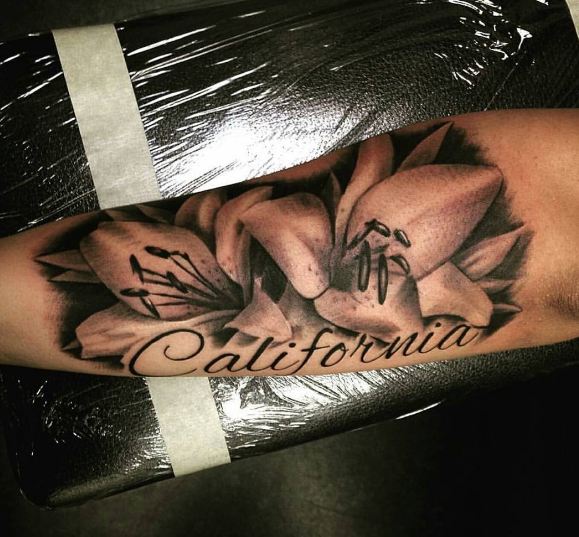 22. If you are from Los Angeles then you would surely love this LA tattoo design inked in the map of California. 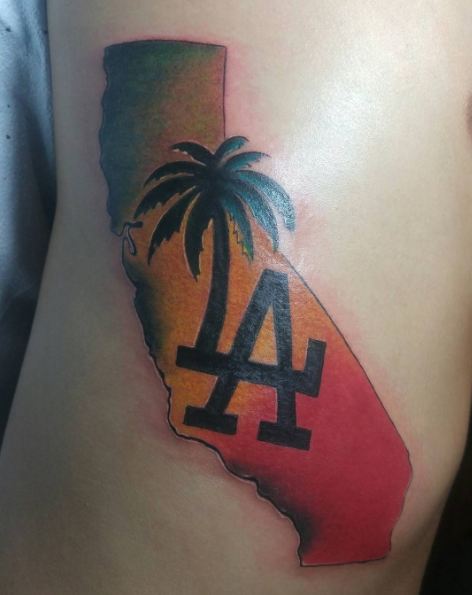 23. In this traditional California tattoo design the artist showed the flora and fauna in the map of California. 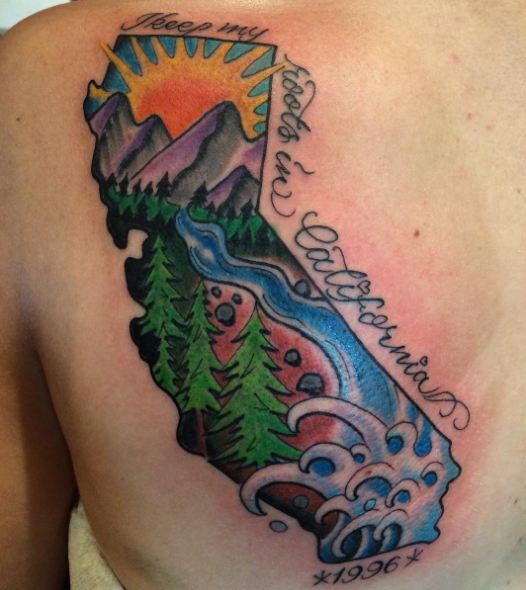 24. The Golden gate bridge tattoo design might fade away very quickly so it is necessary that you take good care of it. 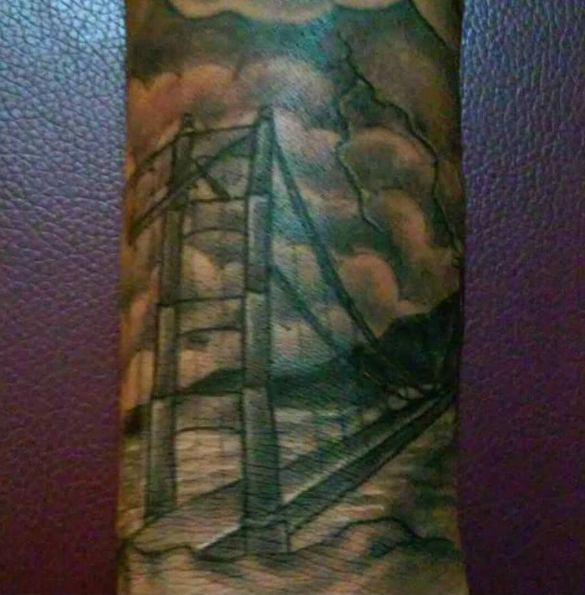 25. You can have a fantasy California tattoo design for example in this traditional tattoo design the artist showed city of agrabah with bald eagle. 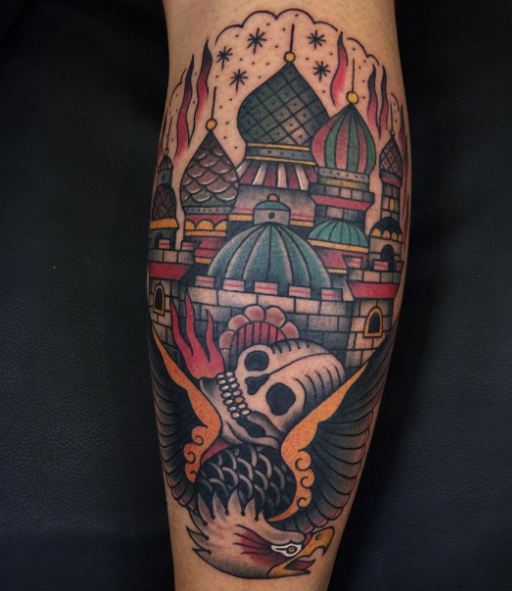 Which California tattoos from the above photo gallery you liked the most?